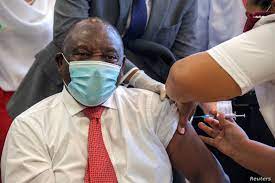 The government has backtracked from its controversial plan which would have seen politicians jump the vaccination queue ahead of ordinary South Africans. Recently, a copy of a circular by the department of health started doing the rounds on social media.

In it, the department said ministers, deputy ministers, premiers and MECs, together with their staff, would now be eligible to be vaccinated. The circular was met with criticism on social media as it meant politicians and their staff would have been given preference. The circular also listed diplomats and people travelling outside the country for work or business, students and sports people leaving the country.

“The department of health receives requests to arrange vaccination against Covid-19 for special groups and individuals who are not currently eligible to be vaccinated under the national vaccine rollout,” read the circular.

It then lists the groups which also include family members of diplomats posted overseas during their visits to SA. The circular further states that individuals can be vaccinated at the request of the presidency, the minister of health or the director-general for the department of health.

“Individuals who have received their one dose of Pfizer vaccine outside SA more than 42 days ago will be eligible to receive a second dose of the vaccine,” reads the circular.

It states that requests for vaccination should be submitted to the department of health by email with supporting documents.

“This documentation may include, but not limited to, visa, work or study permit for country to which individual is travelling to, letter from employer, institution of study or sport federation, affidavit signed by commissioner of oaths. Embassy staff based in SA, as well as individuals working for the UN and other international agencies, will be vaccinated in line with the national vaccination programme eligibility criteria. However, these individuals will receive priority, and their vaccination will be expedited,” reads the circular.

However, the department has since sent out another circular withdrawing the initial one in its entirety.

“Following the circular on the vaccination of special groups and individuals against Covid-19 there have been numerous comments, queries and submissions that indicate that the circular is unclear in its intentions. The circular is withdrawn in its entirety,” reads the second circular.

Currently the country is vaccinating elderly people, frontline workers and people with comorbidities. The country’s vaccination programme had been delayed after it had to sell off doses of the AstraZeneca vaccine because it was not effective against the 501Y.V2 variant found in SA.

Further delays came when the country had to hold off from rolling out the Johnson & Johnson vaccine after it was flagged by the US Food and Drug Administration for possible contamination.