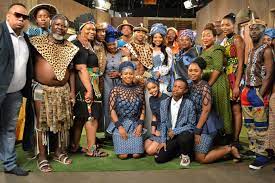 After 14 years of authentic SA storytelling, the last episode of e.tv’s Rhythm City will air on July 16, and just as it started with a bang, it plans to bid farewell to its fans in a similar fashion with unforgettable moments. The show, which started on July 9 2007, will have aired 3,660 episodes by July 16 2021.

“Rhythm City had a stellar cast over the years, portraying storylines that mirrored the reality many South Africans go through while showcasing some of the greatest musical talents this country has to offer. The show has amassed more than four million viewers daily in its tenure, and for that we’d like to say ‘Dankie Mzansi for 14 years,” read a statement from Rhythm City.

Promising a beautiful end to a beautiful story, e.tv promised fans a bit of everything with drama, suspense, tears and happy endings for some favourite characters.

“This week will showcase a tale with beautiful endings- from Jafta and Fats finally finding the love of their lives to Sabelo and Sindiswa moving into their very own home, and Suffocate ending up sharing a prison cell with Khulekani.”

Catch the finale of Rhythm City at 7pm on July 16 at — one last time.

Come Monday 7pm, Mzansi will see some of their favourite SA actors as new characters when Rhythm City’s replacement, House of Zwide, premieres.

Veteran actors including Vusi Kunene — who plays SA’s biggest fashionista and founder and owner of House of Zwide, Funani Zwide — and Winnie Ntshaba, who plays his supportive wife Faith, are some of the top stars fans are waiting  to see.

The pair played Jack Mabaso and Khethiwe on the original Generations.

Other stars to look out for are firm favourite, Motlatsi Mafatshe, who will play comedic Uncle Molefe, and Jeffrey Sekele, who will be playing “the godfather Isaac”, a sympathetic gangster and former MK veteran involved in the turbulent hostel wars during the mid-1990s. Isaac is a loving father of two beautiful daughters and husband to Rea, played by Matshepo Maleme.

New faces on the show will include exciting young talent in Nefisa Mkhabela, who makes her television debut as Ona Molapo, and Shalate Sikhabi, who plays her friend Shoki. They both navigate the fashion world with challenges in their path.