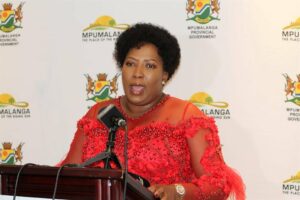 Mpumalanga Provincial Government hosted a two-day Energy Summit at the Ridge Hotel from 24-25 May 2022, the summit is in response to the address of the Premier’s State of the Province 2022 where she committed that government would bring all relevant stakeholders together. She said this will pave way for adoption of the Just Energy Transition towards renewable energy. During the official open of the summit on the 24 May 2022, Ms Mtsweni-Tsipane said that the province was committed to reduce greenhouse has emissions by providing the energy mix, incorporating renewal energy.

“In the Mpumalanga Economic Reconstruction and Recovery Plan (MERCP) we have included a pillar called Sufficient, secure and reliable energy supply and green economy initiatives to recognise the province’s existing role and necessary preparations for an increased focus on renewable as part of reducing emissions” said the Premier. The Just Energy Transition provides the creation of massive new job opportunities in the green economy and has sought to achieve, support and create pathways for just Transition in Mpumalanga social justice and equal opportunities, build and support a local green economy network industry and to also provide policy support to entrench the Mpumalanga Province as a great place for green economy businesses. Ms Mtsweni-Tsipane has further committed the government to strive to protect the livelihoods of the people, after realising the impact of moving away realising the impact of moving away from coal-power energy generation, hence the decision to rather provide the energy mix, including continuing with fossil fuels.

The MOA is designed to stimulate support and development of local SMME’s to participate in the opportunities being created. Responding to the signed MOA with Eskom, the Premier has indicated that this is an indication of the Provincial Government’s commitment to continue with partnerships in securing energy for the people of the province. “It is intention that such partnerships must assist, not only the transition of carbon neutral economy but also increase much needed energy security through fostering renewable energy production, repurpose power stations and explore ways for creating opportunities for small businesses and work. I commend Eskom for releasing land in our Province, for electricity projects under 100 mega watts that can now be built without a licence and wheel electricity through the grid for self-consumption or for sale to third party consumers” said the premier.

In closing remarks, MEC Mkhantshwa mandated that the MGCA to ensure that work on the establishment of a wind farm in the province, begins in eamest. He further said he urge the agency to strive to attract international investors in the green energy space into the province, adding that the MGCA should also support local companies. “I would like to see ground broken on wind farm in Mpumalanga in the next 18 months and that municipalities are ready to participate in this space, in both term of supporting manufacturing and creating an enabling environment for embedded generation and wheeling,” said Mr Mkhantshwa.