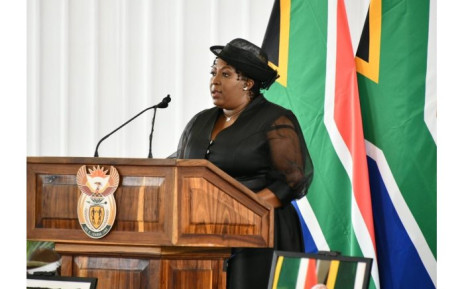 Mpumalanga premier, Ms Refilwe Mtshweni-Tsipane says despite the serious Covid-19 pandemic, and the challenges it has brought about, there has been some positive progress as the provincial government has been able to implement infrastructure projects for the delivery of basic services.

MtshweniA total of 21 Water Infrastructure Projects were completed, she said the projects, valued at R592 million, benefitted 45 470 households. She also said that an additional 22 Sanitation Infrastructure projects, which benefited additional 2 342 households were also completed and a further 46 sanitation projects are under construction. Mtshweni-Tsipane said these projects will improve access to decent sanitation services.

“The Department of Water and Sanitation continues with support in critical municipalities such as Bushbuckridge where the upgrading of the Malvajan Waste Water Treatment Works is under construction, as well as the upgrading of the Embalenhle Bulk Sewer line, using the Regional Bulk Infrastructure Grant,” said the premier.

“The Hoxane regional bulk water scheme is now being shared between the City of Mbombela and Bushbuckridge Local Municipalities, whilst further interventions are envisaged through the RBIG support to augment water supply from the Rus De Winter dam to Weltevreden Water Treatment Plant in the Dr JS Moroka Local Municipality as well as the acceleration of the Regional Bulk Water Supply from the Loskop Dam to the communities of Thembisile Hani Local Municipality,” she said.

Mtshweni-Tsipane also announced that the Department of Water and Sanitation has identified three sites for the construction of the City of Mbombela Dam. She said preliminary studies have shown that of the three possible sites identified within the City of Mbombela, the Mountain View area has been strongly recommended as a possible catchment area for the dam.

The premier also spoke about the establishment of the DBSA sponsored Provincial Programme Management Unit (PPMU) within CoGTA.  She said programmes such as Town Planning, Asset Care, Revenue Enhancement, Master Planning and interventions on Operations and Maintenance planning are some of the programmes which are being rolled out to support municipalities.

“Applications from municipalities to access support through DBSA funding have already been submitted by municipalities and are being currently processed by DBSA.  This support will close the gap on long identified deficiencies of poor infrastructure service delivery planning and inconsistent delivery,” said Mtshweni-Tsipane.

She added that in order to fight corruption and maladministration in the municipalities, the provincial government has completed investigations in terms of section 106 of the Municipal Systems Act in Dr JS Moroka, Dr Pixley Ka Isaka Seme and Govan Mbeki local municipalities.

“In order to stabilize our municipalities, the Provincial government through CoGTA will continue to administer the provisions of section 139(1)(b) of the Constitution in Dr JS Moroka local municipality and any other municipality that fails to operate optimally with clear measurable performance areas to turn around the municipalities for the better,” she said.

The premier said while the provincial government has recorded some milestones in improving the efficiency of the Municipalities, it acknowledges that there are still significant challenges in the areas of financial management, institutional capacity, governance and technical engineering capabilities. She said that through the PPMU initiative, support from National Treasury and the District Development Model the provincial government is hopeful that it will turn the tide against the challenges and position municipalities to be at the forefront of service delivery.

According to the premier, for the government to succeed in delivering services to its communities, the cooperation and collaboration with traditional leaders is the most important factor. Mtshweni-Tsipane said the current leadership posture by all the traditional leaders in the fight against GBVF, illegal invasion of open land and advocacy work against substance abuse are all indicative of a good relationship that should always be nurtured.

“The involvement of Amakhosikati structure further showcase these noble programmes to restore good societal values and humanity. We urge both councillors and traditional leaders to work together and be a part of key local government development decisions taken in Municipal Councils. We further encourage the active involvement of Amakhosi in the Agrarian Revolution Programmes and plans aimed at stimulating the vibrant economies including the development of emerging farmers,” she said.

The premier said Mpumalanga Province is experiencing exponential population growth especially in four municipalities: Steve Tshwete, Emalahleni, Victor Khanye & Govan Mbeki. She added that these municipalities are projected to grow from around 1.16 million in 2016 to 1.87 million by 2030 and that the provincial population has increased from 4.04 million in 2011 to 4.68 million in 2020, an increase of 640 000 people in the 9-year period. She also said that City of Mbombela’s population is projected to grow up to 800 000 people by 2030.

Mtshweni-Tsipane said the increase will put pressure on basic service delivery infrastructure, job and economic opportunities in the municipalities. She said that the provincial government will work closely with these municipalities to strengthen their Spatial Development Plans, complement their infrastructure resources and focus on upgrading of informal Settlements to meet the additional demand from the new residents.