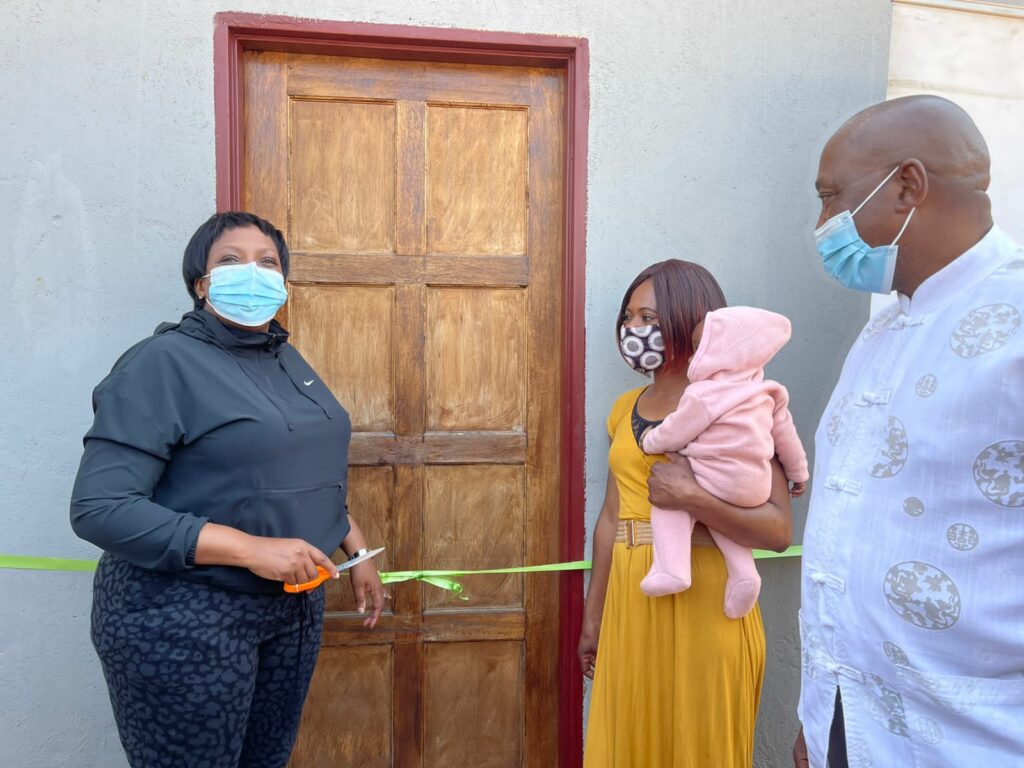 The premier of Mpumalanga, Ms Refilwe Mtsweni-Tsipane together with the MEC of Housing, Mr Speedy Mashilo recently handed over 200 houses in Casteel.  Some of the recipients, whose families  are disadvantaged received groceries  and furniture. Speaking at the handover, the premier said that with the Mandela month having just ended, they are practising his principles.

Mtsweni-Tsipane added that she would also like to thank the contractor, who heeded their call when they asked for help. She said the contractor was asked to build one of the houses for the two families because in on of the recipients did not qualify but because of the situation, they had to build this family a house. The premier said the contractor Huhelped in ensuring that the child headed family gets a home.

The premier also urged members of the public to come up with ways to help them put food on the table. She said looking at Bushbuckridge, the yards are big enough for people to start food gardens. She added together with the Mpumalanga Department of Agriculture, they also donated vegetables to the families. Mtshweni-Tsipane said they got the vegetables from other people, whom the provincial government had helped start food gardens before, she said they approached these people and asked for donations.

“So we have brought these families these vegetables and we also encourage them to carry on planting these vegetables so that they don’t struggle with food, they just get it from their food gardens. All they have to do is to continue maintaining the gardens and to continue planting the vegetables. We have given them all the necessities needed to start the gardens like starter kits which will help them start the gardens. We will also continue supporting them so that they can develop and end up participating in the value chain system. We want them to end up as successful, large scale farmers,” said Mtshweni-Tsipane.

She also said that her dream is to see women getting opportunities to participate in the agricultural sector. She said in order for that to happen, it is the responsibility of the government to create such opportunities, give people places where they can produce much food so that there is food security in the country. She said the government has to support them through school nutrition programmes by buying their produce so that they can make an income.

“That way, we will be able to reduce hunger and poverty. We will also reduce the need for people to beg for grants  from the government so that they be able to live. We will also be encouraging them to be economically active,” she said.

One of the recipients, Ms Fortunate Madukane said she was very happy with the gift she received from the government. She said they were struggling but she is now grateful because she now has a place to lay her head. She  promised the premier that she will start and maintain the vegetable garden and promised that the officials will get vegetables next when they come back.

Another recipient, Ms Thabisile Maoko also said that she is thankful for the house and the gifts they received from the government. She said her family’s living conditions will now change for the better because they have been struggling. Maoko said she was surprised and that she didn’t even know what to say.

The premier encouraged Maoko to work on the yard so she can be able to plant the vegetables.