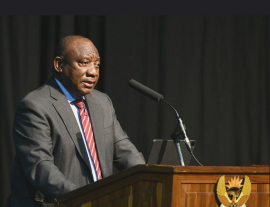 President Cyril Ramaphosa has expressed his condolences and concern at the death of 22 teenagers at a tavern in Scenery Park, East London, in the early hours of Sunday.

While the President awaits more information on the incident, his thoughts are with the families who have lost children, as well as families who are awaiting confirmation of how their children may have been affected, the Presidency said in a statement.

The Presidency said the President is concerned about the reported circumstances under which such young people were gathered at a venue which, on the face of it, should be off limits to persons under the age of 18.

The President expects the law to take its course following investigations into the tragedy.

“This tragedy is made even more grave by its occurrence during Youth Month – a time during which we celebrate young people, and advocate and advance opportunities for improved socio-economic conditions for the youth of our nation,” President Ramaphosa said. –SAnews.gov.za