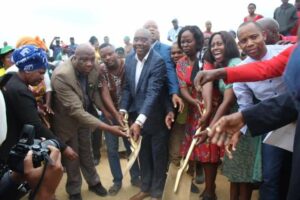 MEC for Public Works Gillion Mashego was joined by the MEC for Health Sasekani Manzini, Mayor Sylvia Nxumalo, the local municipality and the community at large in an official sod-turning ceremony at the site of the new Mapulaneng hospital earlier today where it was officially announced that the project would resume.

This comes a year after the chief of Thabakgolo Kgoshi L.E Mashego pleaded with the government to resume the project due to the dilapidated state of the current Mapulaneng hospital.
The R2. 4 Billion worth ‘state of the art’ hospital has now been identified as one of the regional hospitals in the province. Three main contractors were also introduced for the project.
“We’re here to hand over the project and also to introduce the main contractors. You remember that we started with phase 1 & 2 of fencing and palisades, so today we introduce to you three main contractors who will run the main construction,” MEC Mashego said.
According to the MEC, the R2.4 Billion will be divided amongst the three contractors to complete the work. The MEC further pleaded with the youth of Bushbuckridge to grab the opportunity by both hands and not allow protests to affect the progress of the project.
“In the future, about five hospitals will be referred to the Mapulaneng hospital as it will be a regional hospital now, the people of Bushbuckridge should celebrate.
“The sub-contractors and unemployed people of Bushbuckridge should really benefit from this project, community members should refrain from protests that will stop the project because we’re building 4 more hospitals around the province, we will move the budget elsewhere if the people choose to protest because that would mean they don’t want this development.”
The MEC concluded by giving special thanks to the Thabakgolo Tribal Authority for the demarcated land.