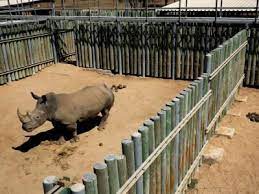 The South African National Parks (SANParks) said that its Skukuza Regional Court, better known as the “Rhino Court”, will continue to operate in the Kruger National Park following a legal battle over its location.
The court, which boasts a 100 % rhino poaching conviction rate, had not been operating for over a year due to a legal battle waged by the Mpumalanga Regional Court’s president, Naomi Engelbrecht, who sought to have it closed and its cases transferred to the Mhala Court.
However, a Constitutional Court ruling has now opened its doors again, allowing for the Skukuza Regional Court to continue operating inside the Kruger National Park.
“We hope this will lead to the speedy finalisation of all rhino poaching related cases that occurred in the Kruger National Park. This will justify the hard work done by rangers, the South African Police Services, the move will also save time and money as those are the most valuable resources in the anti-poaching campaign”, said SANPark’s spokesperson, Ike Phaahla.