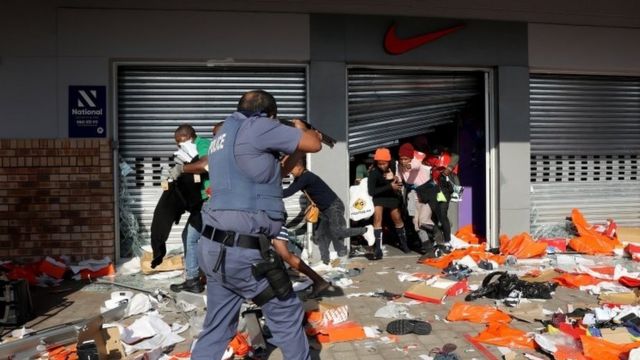 The police confirmed that at least 72 people have died in Gauteng and KwaZulu-Natal. A number of deaths in Gauteng were due to a stampede at malls in Soweto. There are 14 murder cases being investigated in KZN and 19 in Gauteng. Over 750 people have been arrested.

The South African National Taxi Council (Santaco) said taxis are not part of current unrest. Santaco said if any taxis are found with stolen goods or transporting looters, they must be reported. Various Santaco branches have also been working to protect malls and businesses in affected provinces. On Wednesday, taxi services also resumed in KwaZulu Natal.

Long lines of cars and people have been reported in and around the KwaZulu Natal. This is as people attempt to refuel their cars and buy essential supplies. There have been reports that many communities have set up roadblocks to prevent home break-ins. However, Col Brenda Muridili, speaking on behalf of the National Joint Operational and Intelligence Structure (Natjoints), has warned communities not to take matters into their own hands.

“In response to reports of armed community members retaliating against protesters, the Natjoints has emphasised and reminded the public that though people are entitled to protect their property and lives, the Right to life is protected in the constitution, and can only be infringed in extremely limited circumstances to protect the life or bodily integrity of the defender,” said Muridili.

Updates from Durban — 1) Queues around supermarkets rumored to open their doors are extending into the hundreds/thousands. People walking out with bare essentials- maize, milk, baby formula

So we ended up going to Engen in Glenwood (near King Edward Hospital) where they only letting essential workers fuel up and luckily two of us in the van are essential workers. pic.twitter.com/GkdqSLnK9c

People have been flocking to petrol stations over fears of fuel shortages. This came after the Automobile Association warned that if the Durban harbour is not operating – many parts of the country could face fuel shortages.

The Automobile Association has warned that if the Durban harbour is not operating – many parts of the country could face fuel shortages in the coming days.

On Tuesday, looting and destruction continued on Queen Nandi Drive. Several government officials were reportedly heading to the area with law enforcement agencies.

eNCA reporter @RONALDMASINDA Masinda is on Queen Nandi Drive, in Durban. He has the latest update of the #looting happening there. #SouthAfricaIsBurning #DStv403 #ShutdownSA pic.twitter.com/VFfNefi6FO

On Tuesday, in Gauteng, several malls in Protea Glen were the site of looting. Police and army presence did not deter the destruction.

One police Nyala has arrived at Protea Glen Mall. People are scrambling to move away from the area but just as the police van drives past, they've run right back to the cash and carry.#UnrestSA#looting@TeamNews24 pic.twitter.com/CSN72EliGM

Various ministers were in Gauteng on Wednesday assessing the damage from past few days.

#ShutdownSA We are back in Alexandra this morning where various Ministers will assess the situation on the ground, following the looting of malls and shops over the past few days. Minister Ronald Lamola is on the ground with MEC Jacob Mamabolo. pic.twitter.com/vKgFBzF7X8

Overnight there were reports of incidents in Mpumalanga and Northern Cape. In Mpumalanga arrests were made related to the “looting and destruction of property in the Matsulu policing precinct”. While in the Northern Cape, arrests came after “a report of two incidents” in Galeshewe.

As it stands in the Ethekwini Region, according to its mayor, Mxolisi Kaunda;

Impact of protests/civil unrest on pandemic

Many hospitals in KwaZulu Natal and Gauteng were forced to reduce capability. Many people have been unable to go to hospital due to ambulances being attacked. Several vaccination centres could not operate, especially in KwaZulu Natal. Hospitals in those provinces have also seen an increase in hospitalisations related to trauma injuries like gun wounds. South Africa currently has the most vaccine stock since the beginning of the vaccine rollout. However, due to the unrest, the rate of vaccines has drastically decreased. There has also been reports that vaccine supplies have been stolen.

[Thread] 1. The devastating, snowball effect of unrest and looting on #COVID19SA

Which province had the biggest drop in vaccinations and why? pic.twitter.com/22OyaH7mBb

There is also a concern that the protests and riots might cause another surge in infections.

11. From TV visuals it’s clear that many protesters/looters don’t wear masks + no one practises social distancing. It makes them more likely to contract #SARSCoV2, the virus that causes #COVID19. Those events run the risk of becoming superspreader events.

In a statement released on July 13, the Presidency addressed its response to public violence. Meetings were held between government ministers and business leaders on July 12, to discuss the unrest. President Cyril Ramaphosa has been consulting with various leaders from different sectors of South African society, including religious leaders. Ramaphosa welcomed a proposal for a national day of prayer.

#ShutdownSA President Cyril Ramaphosa has embarked on a round of consultations with the leadership of different sectors, to develop a society-wide response to the violence & destruction affecting parts of the country. LI

Ramaphosa chaired a National Security Council meeting to assess developments and coordinate government response to the crisis. Government leaders have also been meeting with informal and small business associations in KZN and Gauteng. President Ramaphosa will meet with leaders of political parties today.

All law enforcement and security agencies have been tasked with protecting key public and private infrastructure, including COVID-19 vaccine storage sites, schools and clinics.

The National Prosecuting Authority (NPA) has been instructed to oppose bail for any suspects associated with public violence, and economic sabotage.

"Those who choose lawlessness to destroy our country and its people must expect to face the full force of the law"
Adv Mthunzi Mhaga,
NPA Spokesperson 🎤 pic.twitter.com/NC79WYuDhC

The four affected stations are in Alexandra, Johannesburg, in Kagiso, Mogale City, Mams FM in Mamelodi, Pretoria as well as Intokozo 101.2 FM, based in Umlazi, Durban. The stations have been in operation for years, and have been a great service to their communities. SANEF has called on SAPS and the SADF to continue acting against the criminals who are determined to cut off key news communication done by these stations. SANEF has encouraged the stations to open criminal cases.

Alex FM reported damages and losses, including studio computers, equipment and infrastructure at around R5 million. Mams FM was forced off air as the transmitter and studios were vandalised, and equipment stolen.

Just yesterday we were employed & today we wake up to a new reality, in a blink of an eye, we are unemployed 💔 I'm numb. Hooligans ransacked Mams Radio💔 #SouthAfricaIsBurning #looting #Newzroom405 pic.twitter.com/p5wRY4EIw4

SANEF acknowledges that everyone has a constitutional right to protest, but that criminality must be condemned, and those arrested to be prosecuted. Alex FM Station Manager Takalani Nemangoe confirmed the radio station is now broadcasting from LM Radio offices in Sandton with donated equipment.