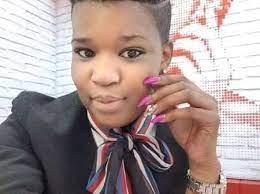 Tshepo Rakoma, a 32-year old woman who was shot and killed by her boyfriend while sitting in her car in a parking lot of a shopping complex was laid to rest in Seshego on Saturday.  It was a sombre mood as friends and family, community members and civil society bid farewell to the mother of three.

Rakoma suffered multiple gunshot wounds allegedly inflicted by her partner of eight years, Josias Lebogo, who last week appeared in the Polokwane Magistrate’s Court on a charge of murder and one of unlawful possession of a firearm. He was remanded in custody and is to appear for a formal bail application tomorrow.

In an emotionally charged service, close friend and neighbour, Boki Makama described the young mother as a trailblazer and a person who would “light up the room when she entered”.

“Tshepo had so many dreams. As we were growing up we used to climb the avocado tree in my yard and look at the view of our hood and fantasise that one day we would own houses around here. She used to like getting people together and it was easy to start a party with her around. I gained so many friends through her, she would light up the room when she entered. To date most of them are like sisters to me. We never thought she would be the one to leave us so soon. I’m too hurt by this tragedy,” Makama said.

Another emotional friend who only introduced herself as Mpho said: “I remember in 2018 when I lost my child. Tshepo was my consolation mate. She was the first one to help me go through the ordeal as she cried alongside me throughout. My heart is broken because the person I counted on is no more. But because we all know she was full of life, wherever she is now the people around her are laughing.”

At the service, Rakoma’s family sat next to each other with tears running down their faces, as they gently comforted each other in the packed hall.

“This house is going to be very quite from now on. Tshepo would bring life here. She was very funny and had an outgoing personality. We used to look to her for laughter during bad times. But now she is the one who (has) left us. The youngest of her children, who is a 2-year-old girl, does not understand what is happening,” she said.

Secretary for the NGO Women Taking Back Safety, Thulamsindo Rapotu, who has been giving emotional support to the family, said in a message to the family: “Our heartfelt condolences to the family, friends, colleagues and community. What a loss, an unnecessary termination of life.

“We still fail to understand why people fail to reason with their sound minds and voices. It can’t be that guns must be the voice of reason and a tool to resolve conflicts. We are also worried by how Covid-19 mentalised and feminised the pain and suffering of women. We pray and hope that we will all stand up and find a way of rebuilding our society. We need men and women of the cloth to help us build bridges of peace and national cohesion. May Tshepo’s soul repose peacefully. #justicefortshepo.”

Rakoma was the second-born of three girls in her family.