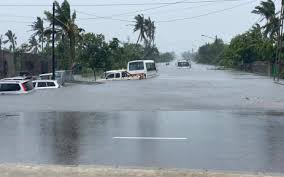 The recent heavy rainfall, that has left some parts of Mpumalanga in a disastrous state, has not spared Nkomazi, the largest subregion in the province. The heavy rains left rubble, massive potholes, damaged roads, roofs that had been blown off and wrecked houses in Nkomazi. Both public and privately owned parks in areas such as Schoemansdal, Buffelspruit, Driekoppies, KaMaqhekeza and Masibekela have been badly damaged.

Last week, the subregion experienced heavy rainfall accompanied by strong winds that uprooted trees. At Malalane’s Inkwazi Shopping Centre, a tree fell on top of a vehicle after it had been uprooted by the wind. Even though at the time of going to press there were no precise figures of the damage caused by the extreme weather in this subregion alone, estimates may lead up to millions of rand.

The premier, Refilwe Mtshweni-Tsipane, recently told the media that government is going to need more than R425 million to repair the damage in Mpumalanga. She said these figures were most likely to go up as they were still busy visiting more affected areas and assessing the extent of havoc caused. Mtshweni-Tsipane is expected to give a detailed report with figures and timelines when she delivers the State of the Province Address next Friday.

Nkomazi’s executive mayor, Johan Mkhatshwa, has appealed to the masses to be tolerant and patient as government is still gathering all the necessary information and assessing the damage.

“The recent heavy rainfall has affected all of us and it is happening at a time we are faced with Covid-19. We are aware that people’s lives have been disrupted by this disaster, however, we are working around the clock to ensure that we repair all the wreckage caused by the rain,” said Mkhatshwa.