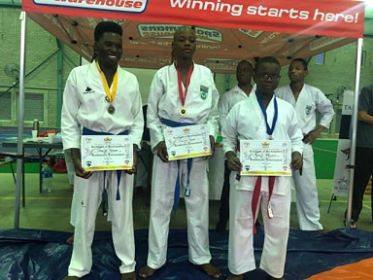 Taekwondo Mpumalanga Province was having its first Development Championship which was held at Shonalanga sports hall in Mbombela on the 4th May 2019, whereby 62 competitors from Thulamahashe, Acornhoek, Mangweni, Nelspruit and Middelburg participated in Taekwondo sparring and demonstrations.
In the competition, the team from Bushbuckridge came out in 1st place, Nelspruit took 2nd place and Mangweni took 3rd place.
“The aim of the championship was to prepare our competitors to the Arnold classic sports festival which will be in Sandton, Gauteng from the 16th to the 18th of this month, and we’re very happy to have won the competition today,” said Job Magagula from the Taekwondo Mpumalanga.
Taekwondo Mpumalanga Province is a member of Martial arts South Africa, South African Korean Martial art Association, Taekwondo International in England under the leadership of Grand Master Dave Oliver, 9th degree black belt of Taekwondo. Taekwondo Mpumalanga Province is headed by Master Job Magagula 4th degree black belt of Taekwondo and 5th degree black belt of American Iron Dragon Organization.
“The competitors were competing in fighting and patterns. Conwel Mkhonto, the instructor of Bushbuckridge team did well by developing the Taekwondo in Bushbuckridge,” Magagula said of the winning team.
On the 16-17 May 2019 the team will be in competing at the Sandton Convention Centre, in Arnold classic sports festival, whereby American actor Arnold Schwarzenegger will be there.