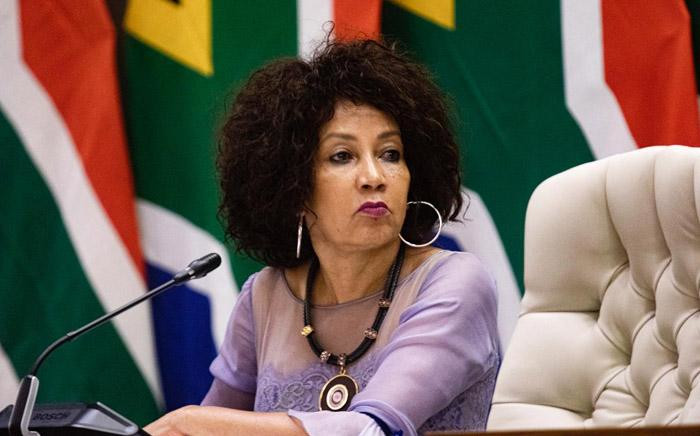 The Department of Human Settlements, Water and Sanitation recently held a strategic planning session in Pretoria. Speaking at the session, the department’s Minister, Ms Lindiwe Sisulu said the maintenance and development of water infrastructure is crucial so that all South Africans can have access.

Sisulu also that it is important to improve the delivery of decent sanitation by exploring the use of innovative technologies. The minister said the department’s political guidance and direction is premised on the government’s Programme of Action, which drives all its efforts to respond to and carry out the needs and desires of South Africans.

According to Sisulu, the planning terrain for the 2020/2021 medium term has been intensified and it includes the department’s entities. She said the department sets the agenda and it identifies key projects for State Owned Companies and entities to implement over a defined period. She also added that these interventions are essential for growth and sustained service delivery to a growing population and its demands.

“South Africa has been facing difficulties since the financial crisis in 2008. However, the country has embarked on an aggressive infrastructure development programme in order to stimulate growth, the programme is led by the Presidential Infrastructure Coordinating Commission. Global growth remains muted and financial markets have become volatile. Currencies of emerging markets have also become weak and they have fluctuated widely,” said the Minister.

She added that the department has a constitutional responsibility of delivering basic services to the people even though it is faced with domestic factors such as constrained electricity and industrial relations. Sisulu said because of the accruals the department had in the last few years, it is necessary for it to review its strategic plan so it can align to the Annual Performance Plan (APP) targets with the available budget.

“We will continue to find cost effective ways of realising our mandate within the allocated budget. We all had to work hard in order to turn the economy around and to reduce wastage. This belt-tightening exercise will require everyone to go through a difficult period until the economy recovered,” said the Minister.

Her Deputy Minister, Mr David Mahlobo, said the global importance of water cannot be over-emphasised. Mahlobo said water is crucial for all life and important human socio-economic wellbeing, hence its value is seen in context as an environmental, social and economic good.

“The security of water supply is paramount for socio-economic development. We must always plan for climate change. The challenges posed by climate change, water, nutrients and energy are converging. About 12 million hectares of land become degraded each year. Droughts and floods are becoming more frequent and larger. For a host of reasons, Africa is at the eye of this storm. Some reasons include the fact that southern Africa has already lost 25% of its soil fertility and some countries on the continent have some of the highest population growth rates globally,” said Mahlobo.

Mahlobo added that the protection of the water resources is critical, especially due to high levels of deteriorating water quality caused by infrastructure failure in municipalities, mines and industries. He said the department conducted a compliance monitoring on  407 water users which included agriculture, dam safety, industry, mining, municipality, public entities and stream flow reduction activities in the previous financial year. 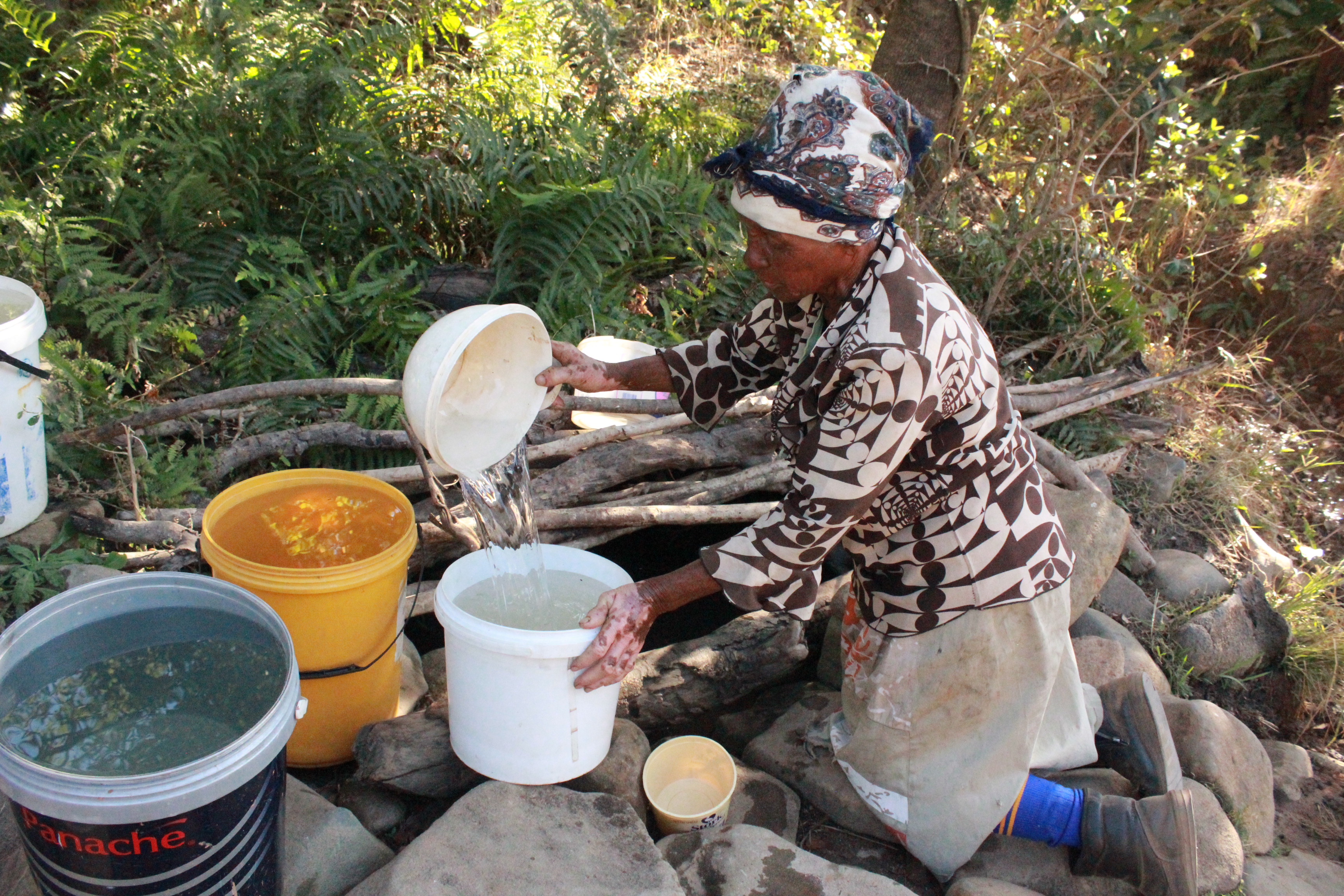 Gogo Esther Malele of Thabakgolo collects water from a well.

The residents of Thabakgolo have yet again raised concerns over “being taken for granted” in their pursuit of running water with the local municipality. The community members say the municipality doesn’t take their concerns very seriously.

In a previous article with Bushbuckridge News published in September 2018, Gogo Esther Malele told Bushbuckridge News; “This is the only water we’re able to access. We share the water with pigs, dogs and everything else you can think of. We’ve been drinking the same water for all our lives.”. “We don’t have anywhere else to fetch water but here,” she was speaking in reference to the small fountain they fetch water from.

In that very same previous article, the community also reported that the steel tank meant to supply the community with water, which was installed in 2005, had not sourced out a drop of water. “Back in 2005 the municipality provided us with a steel tank, 13 years later the tank hasn’t supplied even a single drop of water,” Phumollo Theko, the community’s chairperson said last year.

Recently, the angry community went to the municipality’s head office to demand to communicate directly with the executive mayor. The community now says a project had been handed over to install a water tank, yet they still don’t know the project manager; “We are taken for granted! Last year they promised to introduce the project manager to us. The project has begun already but now it has stopped without a reason, and what’s surprising is that we don’t even know who the contractor is,” one of the community members told Bushbuckridge News.

The aftermath of the protest that led to College View's shutdown

Everything came to a standstill as residents of College View in Bushbuckridge protested against lack of water. Pupils could not get to school, cars and taxis were prevented from leaving or entering the area, roads were blocked with burning tyres, rocks and logs and some of the businesses could not operate. As residents blocked roads, while singing struggle songs as they protested on Wednesday Morning.

According to Mr Sidney Khoza, who is the Ward 9 Councillor of Better Residents Association (BRA), more than 20 residents came to him and complained that they have been without water for almost a month. Khoza said the residents told him that when they call the ANC ward councillor, he doesn’t come to them or attend to their problems.

“Another problem is the fact that some of these residents in areas like College View have flushing toilets inside their houses so it becomes a problem when they don’t have water. They asked me to call a community meeting and that is where all the stakeholders from College View and Malepoleng as well as the community members decided to have a shut down in the area” said Khoza.

When asked, Khoza also explained that they didn’t stop these learners from going to school; he said the learners were turned away since there were no teachers at school. He explained that most of these teachers live outside College View so they couldn’t enter the area. He added that the community had to do this because some of these kids go to school without having had a bath.

According to one of the residents, Ms Gleda Sihlangu, she has been without water for the past three weeks. Sihlangu said as a result, everyday things like washing and doing laundry becomes a problem. She said they end up being called by teachers at schools complaining about these kids who come to school unclean.

“We now have to buy water and on top of that we have to push wheelbarrows to get the same water we are buying. This is very sad because places like Matenteng have running water yet they don’t pay any municipal rates and we do. Three months ago we were sent bills which we paid, yet we don’t have water” said Sihlangu.

Speaking to Bushbuckridge News, the Executive Mayor of Bushbuckridge Local Municipality said the municipality arranged plumbers to check what the problem might be with the water supply in that area. At the time of going to print, these plumbers were still busy at the area and according to the mayor, they were making progress.

Khoza did confirm this and told Bushbuckridge News that the water problem has been fixed. He said this shows that water has been available all along but the municipality is making it unavailable to residents. According to Khoza it is wrong that the municipality only responds after the community has protested.

He further said that, if the municipality fails to pay Rand Water now, how are they going to reticulate their own running water system and that this might result in residents not having clean water. He also added that the residents want a service provider who is going to do their job well.