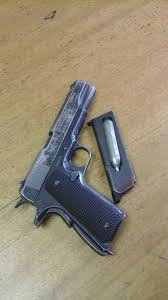 The SAPS Acornhoek cluster has confirmed the untimely death of a school teacher from Madras.
The teacher was apparently shot and killed by his girlfriend, who then turned the gun onto herself in an attempt to kill herself using an unlicensed firearm.
According to the police report, the incident took place at around 3pm yesterday. It is was also reported to Bushbuckridge News that the deceased was a school teacher at Rindzani High School.
A case of murder and attempted murder was opened.