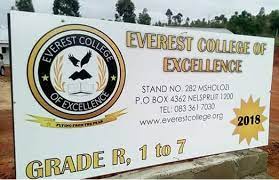 The Mpumalanga Department of Education and the police have shut down a school believed to have been operating illegally. Everest College of Excellence, situated in Mbombela, was closed down today.

The department said the closure came after they learnt that the school was established, maintained and operated without being registered by the Department of Education. According to it’s website, Everest College Of Excellence is a school created to uplift one of the underprivileged settlements around Msholozi Area in Mbombela municipality.

“Our main mission is to contribute towards society’s efforts of achieving sustainable development through the pursuit of education, learning, skills transfer and research at the highest local and international levels of excellence. In a bid towards realizing our mission; the school will be equipped with a team of qualified, committed and competent lecturers,” it reads on the website.

“Everest College Of College will endeavour to exceed the highest standards of education expected from a rural setting in an underprivileged population setting. Education is the key and the only way a child born in an underprivileged society can transcend limits and lead a meaningful life, uplifting his siblings, his parents, and breaking the cycle of poverty, disease, unemployment and crime.”

Mpumalanga Department of Education’s Jasper Zwane said the operation of this “so-called college” was in violation of the South African Schools’ Act (SASA) Number 84 of 1996 as amended, which clearly states that no person shall establish and maintain an independent school unless it is registered by the Head of Department.

“It further states that, any person who contravenes this, is guilty of an offence and upon conviction shall be liable to a fine or imprisonment for a period of up to three months. The department thus advises parents of all affected children to apply for admission in the nearby schools and that they will be assisted accordingly,” he said.

Zwane said the department would continue with the drive to close illegal independent schools throughout the week. He also said that appealed to the public to alert the police or the Department of Education if they suspect that an institution is operating illegally.

The acting police commissioner in Mpumalanga, Major General Thulani Phahla indicated that people should stop with the illegal activities of operating bogus schools. He said operating such institutions was not only wrong, but that it was also a waste of time for learners.

“It is something that must be stopped with all the might of the law,” he said.

Mpumalanga Education MEC, Bonakele Majuba said the operation of illegal schools was very disruptive as it affects not only the children and their parents, but ultimately affects the smooth running of the teaching and learning programme within circuits and districts.

“It is on that note that we advise parents to check the legality of any institution before they enlist or register their children,” Majuba said.

The Department of Education said it would make the necessary arrangements that pupils from the schools are registered at nearby public schools.