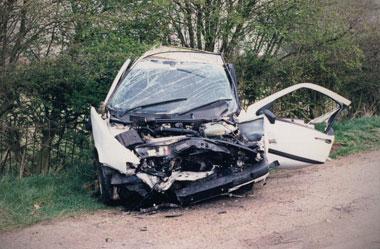 Unsuspecting used vehicle buyers are purchasing cars without knowing they have been previously written off because the registration code of the vehicle, possibly through fraud, bribery and corruption, has not been amended to reflect this.

Not only does this lead to consumers purchasing a used vehicle at an inflated price but these rebuilt vehicles are often unroadworthy and dangerous to drive and require the new owners to spend a significant amount of money to get them into a safe and roadworthy condition.

This has resulted in the South African Motor Body Repairers’ Association (Sambra), an association of the Retail Motor Industry Organisation (RMI), appealing to the SA Insurance Association (Saia) to allow public access to the vehicle salvage database to allow consumers to check if a vehicle has been written off before concluding a transaction but Saia has declined this request. Sambra has provided inspection reports and photographs of two vehicles that were previously written off, subsequently poorly repaired and then sold to unsuspecting consumers.

An Audi Q5 that was written off in Cape Town in February 2019 was sold on auction as a Code 2 (‘second hand vehicle’) instead of Code 3 (‘written off, rebuilt vehicle’). It was then poorly repaired and ended up at a Randburg dealership, where it was sold. The problems ranged from both chassis legs being bent and still visibly distorted to the front X-member that holds the front engine mount being missing.

“The mere fact the front main X-member was not refitted is very dangerous and makes this vehicle unsafe to drive.The engine is leaning forward into the front radiators,” the report stated.

The other example involves East London-based Thabiso Mahamba, who purchased a second hand Ford Ranger from a Gauteng dealer for R378 000 in August 2020 without knowing it had previously been written off and deemed uneconomical to repair. An inspection report lists 35 serious faults, including hydraulic brake lines being secured with cable ties, multiple structural repair issues on the frame and a front suspension that could break, collapse or shear because of the use of heated second-hand suspension parts.

Sambra national director, Richard Green said these are perfect examples of why Sambra is urging insurers to release a write-off register which can protect unsuspecting buyers.

“The lack of information available to potential buyers in the used vehicle market about previously ‘written off’ vehicles is just unacceptable. Access to the write-off register is arguably the only way potential used car buyers can check that previously written-off vehicles have been repaired to the correct standard,” he said.

He said Sambra believes a formal, publicly accessible write-off register will minimise the illegal use of vehicle identifiers in the rebirthing of stolen vehicles and in curtailing stolen vehicle parts being used in the repair of damaged vehicles while also helping to eliminate unsafe vehicles for unsuspecting purchasers.

“If there isn’t a market for these cars, the practice will have to slow down. The only way for a vehicle that has been written-off to be registered as a Code 2 vehicle rather than Code 3 is through bribery and corruption. A roadworthy certificate is not of any assistance to consumers because that part of the industry is fraught with fraud,” he said.

Green said it is difficult to know how prevalent this problem is because it “comes up from time to time and then goes away”. He said Sambra has employed a full-time investigator “to build up a body of evidence”.

TransUnion Africa vice president of auto information solutions, Kriben Reddy said that not being able to check if a vehicle has been previously written off is a significant problem because many vehicles are being cloned.

Saia insurance risks GM, Pamela Ramagaga said Saia has in the past been requested to make the Saia member vehicle salvage database public and this conversation has been ongoing for more than 15 years.

“However, the same reasons we gave then are still valid today. The Saia vehicle salvage database is for Saia member consumption and has been created to combat crime that the non-life insurance industry is struggling with. It therefore was never created for public utilisation,” she said.

Ramagaga said the database only includes the one-third of vehicles in South Africa that are insured and not the two-thirds of vehicles that are uninsured. She said Saia does not believe the database is the solution but rather effective policing of vehicles that are bought and repaired after being sold by, by auction houses for example, and that these vehicles reflect the right code in line with the Saia Code of Motor Salvage.

Ramagaga stressed it is not the responsibility of the non-life insurance industry to follow-up on a correctly coded written-off vehicle that has been sold but only to ensure that all legislative process requirements in line with the code have been adhered to by the salvage agent. She confirmed there is a regulatory obligation on insurance companies to amend a vehicle’s registration on eNatis, for instance, to Code 3 if it is written off or to Code 4 if it is irreparable and must be permanently destroyed.

Ramagaga stressed that insurers will not be involved in the classification/coding of about two-thirds of the vehicles on the road that are uninsured. She added that there is clear complaints process in the code in cases where there are allegations that any of Saia’s members did not follow the code but are yet to receive any formal complaints or report of such instances.